This team has won more World Series Championships than any other team outside of the Yankees: 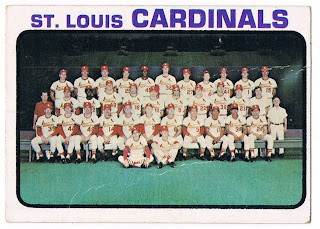 Card #219 -- St. Louis Cardinals Team Card
It's also the team that has retired the most jersey numbers of any team outside of The Bronx. Counting a microphone for Jack Buck, a logo for Rogers Hornsby (who played most of his career before the numbers were added) and a made-up number honoring owner Gussie Busch's 85th birthday, there have been 14 numbers retired by the team.

However, the team's dominance would be muted during the 1970s, as the team failed to win a pennant depite having a Cy Young Winner (Bob Gisbon, 1970) and a pair of MVP winners (Joe Torre, 1971 and Keith Hernandez, 1979). Despite having several Hall of Famers in the field and another in the dugout (Red Schoendienst) the team that made three World Series in the 1960s were unable to finish any higher than second place for a dozen years after the realignment into divisions.

The picture above features the 1972 team that finished in fourth place in the N.L. East, finishing 76-81 in a strike-shortened season. In 1973, they fared a little better, going 81-81 but finishing in second place in a contentious division. That said, the fans stuck by the team until "Whitey Ball" brought them more success in the next decade.
Posted by Chris Stufflestreet at 8:30 AM