1973 was this guy's first full year as an everyday major league catcher: 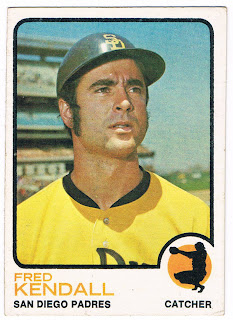 Card #221 -- Fred Kendall, San Diego Padres
Unfortunately, he played with the Padres, who lost over 100 games that year. That may account for the "deer in the headlights" look that Fred Kendall gives in this portrait. After first coming up with the team in 1969, he backed up Chris Cannizaro, Bob Barton and Pat Corrales. And those guys took a real licking on the early Padres teams (in fact, Corrales's card shows the result of the battering those guys often took). In the 1972 season, Kendall was the next guy on the firing line.

He remained the Padres' regular backstop through 1976, an era where the team never saw a winning season. In 1977, he was finally given a chance to play with another team; unfortunately, that team was in Cleveland and they weren't much better. The next season, he was traded again to the Red Sox. It was a team that was in contention for much of the year and reuinited him with his old skipper Don Zimmer...but had a Hall of Fame-caliber presence behind the plate in Carlton Fisk.

So, he went back to his original team as a free agent and spent the next year and a half there before retiring. After his playing days, he followed the lead of many catchers and went into managing. For four years, he was a skipper in the White Sox's system and then became Buddy Bell's preferred bullpen coach. His son was Jason Kendall, who was also a big league backstop from 1996-2010.
Posted by Chris Stufflestreet at 8:30 AM