This player was a decent hitter, and the picture highlights that well: 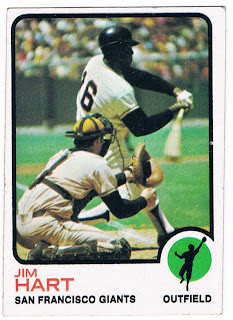 Card #538 -- Jim Hart, San Francisco Giants
But then again, with teammates like Willie Mays, Willie McCovey and Orlando Cepeda batting around you in the lineup, you're going to get your share of good pitches. While this card shows Jim Ray Hart as an outfielder, he actually came up as a third baseman in 1963 and supplanted Jim Davenport from his regular position. Since Hart's bat was better than his glove, however, Davenport eventually retained his spot in the late 1960s as age and injuries began making Hart more of a liability at the "hot corner."

At that point, Hart moved to the outfield primarily, but still backed up his old position occasionally. While he never appeared in a postseason and only got into one All-Star game, Hart was a critical part of the Giants' attack in the 1960s. As his skills diminished, Hart was sold the the Yankees during the 1973 season with the hopes that the new designated hitter position could capitalize on his hitting prowess and keep his glove off the field. He lasted in that capacity until early in the 1974 season, when he retired.

After his playing career, Hart went to work as a warehouseman for Safeway in California.
Posted by Chris Stufflestreet at 8:30 AM