As a young collector, I picked up this guy's 1976 Topps card in a trade with a friend's older brother: 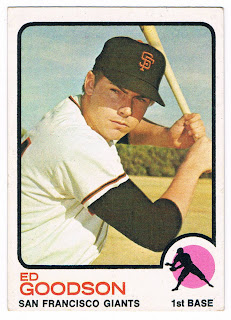 Card #197 -- Ed Goodson, San Francisco Giants
On that card, Ed Goodson looked a lot different than he does here. On that 1976 card, Goodson rocks a righteous perm and is smiling. You can credit the laid-back L.A.atmosphere, but it's an airbrushed photo so he hadn't gone to Southern California yet. Here, he has a scowl and looks like he's taking it personally that he's batting (or that the photographer told him to pose). Really, you can't get much farther on the spectrum of human emotion than these two pictures.

Goodson played with the Giants from 1970 through 1975, when he was traded to Atlanta. He played for te Dodgers in 1976 and '77. In his final plate appearance, he struck out in the World Series. After the Dodgers released him in the Spring of '78, he signed with the Indians but was unable to make the parent club.

After retiring, Goodson returned home to Pulaski, Virginia, where he eventually became a high school baseball coach.
Posted by Chris Stufflestreet at 8:30 AM