This player's nickname came from his mane of red hair, but the picture here skews the color out of proportion: 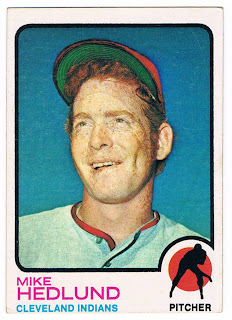 Card #591 -- Mike Hedlund, Cleveland Indians
However, despite the airbruhing job, Mike Hedlund didn't even make it onto the Indians' roster in 1973 and never pitched a major league game after 1972. He had played for the Indians, though: he came up with the team in 1965 and again in 1968. However, he appeared in a total of six innings for them in his two stints before being claimed by the Kansas City Royals after the '68 season in the expansion draft.

The Royals used Hedlund as both a starter and reliever during their first four seasons, and was most effective when used from the bullpen. Unfortunately, he contracted the Hong Kong Flu with pitching in Venezuela after the 1969 season and suffered after that. When the 1972 season ended, he was dealt back to Cleveland; after spending all of '73 in the minors for them an '74 in the White Sox' farm system, he hung it up after he discovered he was about to be dealt to the Reds in '75.
Posted by Chris Stufflestreet at 8:30 AM