This team was in the middle of a an 88-season championship drought as this card was issued: 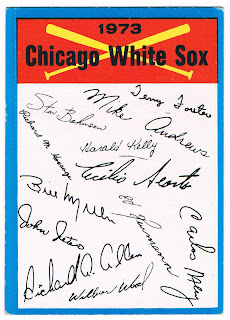 (No Number) -- Chicago White Sox Checklist
It was slightly longer than the celebrated "Curse of the Bambino" that was lifted the year before, but shorter that the one that the other baseball team in Chicago is still enduring. And for all of the celebrated "Crosstown Series" that have been held between the Yankees and their N.L. counterparts over the years, it was old hat to Chicagoans, who hosted the first cross-town Series in 1906, 15 years before the Yanks ever got into the Fall Classic.

And...sorry, Cub fans, the White Sox won that series in 6 games. They were one of the powerhouse teams of the American League's early years, but an association with gamblers in 1919 earned the team a black eye that lasted for years. It would take 40 years before the team was once again competitive, but the Yankees were the powerhouse then and perennially kept them in second. The one year they did beat the Yankees (1959), the Dodgers were ready to deliver a smackdown of their own. By the time the 1970s rolled around, the team was back in their regular doldrums.

The names on the front of this card have a full outfield (Kelly, Jeter, May), Ed Herrmann at catcher, Dick Allen at first, Mike Edwards Andrews at second and Bill Melton at third...but no one at shortstop. So, this card won't show a full "game-ready" lineup. The pitchers are Wood, Bahnsen, Acosta, Forster and Gossage.
Posted by Chris Stufflestreet at 8:30 AM