This player's nickname was derived from the fact that he was a Hank Aaron fan: 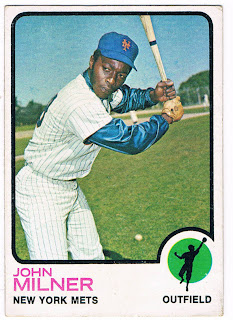 Card #4 -- John Milner, New York Mets
The Atlanta native was still a teenager when the Braves moved into his hometown. Unlike many fans, he actually spent several years on the same diamond as his idol. His nickname wasn't ironic, either: he had some power, slugging ten grand slams in his career even though hit hitting might not have been up to the same standards as Aaron's.

John Milner came up with the Mets late in the 1971 season and finished third the next year in Rookie of the Year voting. At first, he was in a platoon system with Cleon Jones in left field, but transitioned to first in 1973. Despite suffering a hamstring injury early that year, he managed to return and help his team into the World Series. Milner remained with the Mets through the 1977 season before being dealt to the Pirates.

In Pittsburgh, where Willie Stargell was ensconced at first, Milner accepted more of a utility role with the club. While backing up Stargell and Bill Robinson in left, he also filled in wherever he was needed and was a key cog of the team's 1979 World Series-winning "Family." He was sent to Monreal in 1981, but returned to the Pirates in 1982 and finished his career.

In 1985, his name popped up again in the sports pages when he testified in the Pittsburgh cocaine trials. He admitted to using the drug during his time in Pittsburgh and even confirmed the oft-repeated rumour that amphetamines and "greenies" were readily available as long as he was in the majors.

Also during the 1980s, his cousin Eddie Milner suited up with the Reds and Giants. Sadly, John Milner died in 2000 of lung cancer.
Posted by Chris Stufflestreet at 8:30 AM