Here's a guy who's airbrushed in a Phillies uniform but never played an official game for the team: 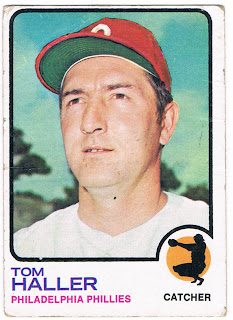 Card #454 -- Tom Haller, Philadelphia Phillies
Tom Haller spent 1972 in Detroit, where he served as the catcher on July 14, in the same game where his older brother Bill was the home plate umpire. That's one of those situations where insulting the other guy's mother after a bad call is counterproductive.

Haller -- a former Fighting Illini quarterback -- came up to the Giants in 1961, where he and Ed Bailey platooned behind the plate. The next year, the two helped the team to a World Series that went right to the ninth inning of the seventh game, but they were on the losing end to the Yankees. The platoon continued through 1963, when Bailey was traded and Haller became the undisputed starter. He took the spot behind the plate for four seasons, directing several 20-game winners and a Cy Young award winner (Mike McCormack, 1967). However, the Giants always seemed to come up in second place behind either the Dodgers or Cardinals, so he was made expendable and traded to the Dodgers after the '67 season was over.

The trade was the first made between the Dodgers and Giants since their move to the West Coast a decade earlier. Rather than focus on the fact that the two teams are bitter enemies (enough to see Juan Marichal take a bat to John Roseboro's head once), Haller spent four years behind the plate as the Dodgers' catcher and earned his third straight All-Star berth the first year he spent with the team. After the '71 season, Haller was traded to the Tigers, where he settled in as a backup to Bill Freehan. He spent one year with the Tigers and opted to retire after being traded to the Phillies.

After his retirement, Haller returned to the Giants. He was a coach from 1977-'79, the team's farm director from 1980-'81 and them served as the team's GM through 1985. He was the manager of the Birmingham Barons and then the assistant GM for the White Sox in '86.

Sadly, Tom Haller died in 2004 after suffering from what was called a "long illness."
Posted by Chris Stufflestreet at 8:30 AM