Part of the "Veale, Lamb and Moose" Combination

This pitcher spent his entire career in Pittsburgh, which in 1970-'71 also boasted Bob Veale and John Lamb in their arsenal: 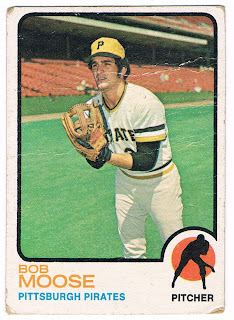 Card #499 -- Bob Moose, Pittsburgh Pirates
Veale is perhaps the best-known of these pitchers, but Bob Moose was the only one who tossed a no-hitter in the majors. He tossed his gem against the eventual World Series champion Mets in 1969. At the time this card was issued, he had just made a big mistake, uncorking a wild pitch in the bottom of the ninth during the final game of the NLCS -- the result was the image on this card -- that allowed the Reds to advance to the World Series and was the last game Roberto Clemente ever played.

Moose signed with the Pirates in 1965 and came up to the team late in 1967. By 1968, he earned his spot in the rotation and posted double-digit win totals from 1969-'73. In 1971, he pitched in three games in the World Series en route to winning the only ring of his career. In 1974, however, a blood clot under his pitching arm required surgery (and the removal of one of his ribs). Moose was never really an effective pitcher after that, but pitched through 1976.

Sadly, on October 9, 1976 -- his 29th birthday -- Bob Moose was driving a car to Bill Mazeroski's golf course when his car veered off the road and into the path of another car. Tragically, he died in the accident.
Posted by Chris Stufflestreet at 8:30 AM