This player spent 13 years in the majors but never more than two seasons for any team: 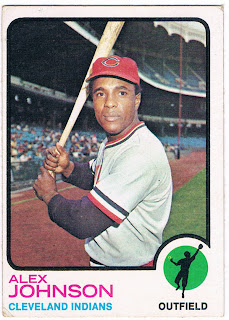 Card #425 -- Alex Johnson, Cleveland Indians
As a talented hitter who didn't have similar fielding abilities, the introduction of the designated hitter in 1973 should have helped Alex Johnson. Unfortunately, his surly demeanor and sometimes lackadaisical attitude hastened him to another team even as the 1973 season was beginning.

Johnson first came up to the majors in 1964 with the Phillies, a team that also counted future malcontent Dick Allen. After two years with them, he spent another two in St. Louis and two more with Cincinnati. Two more years followed in California, where Johnson won the 1970 batting title but was involved in incidents throughout '71. A year in Cleveland followed in 1972. Traded to the Rangers during the Spring of '73, he went to the Yankees the next year and the Tigers in 1976.

After a year in Mexico, he returned home to Arkansas, There, he took over his father's truck repair and leasing service.
Posted by Chris Stufflestreet at 8:30 AM