What's Better Than Playing For Your Idol?

Here's another player whose career was basically over before it was issued: 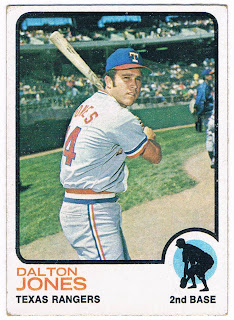 Card #512 -- Dalton Jones, Texas Rangers
Finishing his career in Texas meant that Dalton Jones played for his boyhood idol Ted Williams, who managed the team at the time. And it was Williams who was used as a recruiter to entice Jones to sign with the Red Sox in 1961. He played with the BoSox from 1964-'69, and was a part of their "Impossible Dream" season of 1967. A backup for both Joe Foy at third and Mike Andrews at second that season, he played in six of the Series' games and put up a .389 average.

Before the 1970 season, Jones was traded to the Tigers. It was with Detroit that he made his most infamous hit: a three-run single that should have been a grand slam. When Jones hit the towering shot, the runners weren't certain if it would land in the seats or on the field. As a result of poor communication, Jones passed Don Wert between first and second and was called out. Jones was the goat, he blamed Wert for not running, and I say the first base coach was partially responsible. He should have seen what was going on.

Jones was traded to Texas early in the '72 season, reuniting him with Williams. The Rangers released him in the spring of '73, or just about the time his card showed up in packs. Jones signed with the Expos but failed to rise above the AAA level and retired when the year was over. As a result, the staitsics on the back of this card show his final record in the majors.

After his retirement, Jones pursued opportunities outside of baseball, working for a bank and then the Exxon company.
Posted by Chris Stufflestreet at 8:30 AM