This player's nickname (as well as his other one, "Rojo") came from his red hair, which isn't really evident on this card: 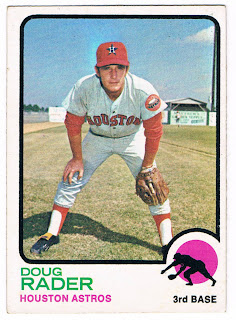 Card #76 -- Doug Rader, Houston Astros
However, don't let the fact that he looks like he's taking his position at the county fair fool you...Doug Rader was one of the best defensive third basemen at the time. He was the reigning Gold Glove winner at his position, winning the award for five straight years from 1970-'74. His career batting average of .251 makes him look like a one-tool player, but he was unfortunate to play most of his career in the Astrodome. The vast expanses of that stadium killed many player's averages and masked the fact that Rader possessed some power. He hit more than 20 homers three times (and 155 overall) in an era not known for its long balls.

Sadly, Rader's skills were in decline when he finally escaped that cavernous stadium. In 1976, he went to the Padres, who then traded him to Toronto midway through the '77 season. In the spring of '78, the Blue Jays cut him, along with some other veterans who didn't figure in their long-term plans. Rather than try to catch on with a new team, Rader retired.

He became a manager after his playing career was over, beginning in the PCL in 1980. In 1983, he took the reigns of the Texas Rangers. Despite the belief that he was well-suited to lead a winning team, none of his squads were able to stay in contention. He remained at Texas until 1985, was an interim skipper with the White Sox in 1986, and led the Angels from 1989-'91.
Posted by Chris Stufflestreet at 8:30 AM