Thanks to the advent of free agency, this man was on the World Series-winning team for four consecutive years: 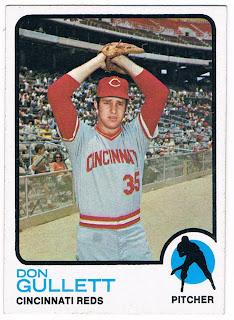 Card #595 -- Don Gullett, Cincinnati Reds
At the time this card was issued, Don Gullett was coming off of a disappointing 9-10 season, with an additional 0-2 mark in the postseason.1972 would be his only losing campaign, however. In nine years, he would post a final 109-50 mark, a terrific .686 winning percentage. While you might think that having players like Rose, Bench, Morgan, Perez and later Reggie, Thurman and Chambliss helping him out, he was known as a crafty pitcher who could get the job done on his own. Pete Rose said he was "the only guy who can throw a baseball through a car was and not get the ball wet."

Gullett was signed in 1969 by the Reds and came up to the team the next year while still 19 years old. As a rookie, he appeared in the 1970 World Series, earning a save against the Orioles. He would return to the Series with the Reds in 1972, 1975 and 1976, winning rings in the last two. Despite showing signs of injuries, his arm was as much a factor in the Reds' back-to-back titles as the fabled hitting of its stars, and Gullett was one of the early recipients of the free agent bonanza. He signed a six-year, two million-dollar deal with the Yankees after beating them in the 1976 Series.

Gullett's arm troubles would pop up again and limit his time in pinstripes, but not before seeing him lead the American League with a .778 winning percentage in 1977. In 1978, his arm troubles finally caught up with him, requiring surgery after eight games. He remained on the Yankee's roster through 1980, but was unable to pitch in the majors again.   He returned to the Reds after retiring, serving as their pitching coach from 1993-2005.
Posted by Chris Stufflestreet at 8:30 AM