This guy looks like he's in the middle of nowhere, waiting for something to happen: 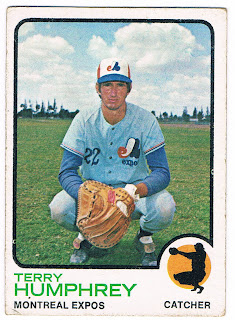 Card #106 -- Terry Humphrey, Montreal Expos
Actually, several of the Expos in the 1973 Topps set are pictured in this seemingly remote location. Really, check it out...you can simply scroll down the right side of this page and click on the label for "Montreal Expos" and see. Go ahead, this blog can use the additional traffic.

Terry Humphrey's career lasted from 1971-'79, where he mainly appeared as a backup catcher. He came up with Montreal, where he worked as a #2 catcher behind John Bateman, Tim McCarver, John Boccabella and Barry Foote. By 1975, a new kid named Gary Carter was being converted from the outfield to a backstop, so Humphries was traded to Detroit. However, the Tigers already had their own regular catcher, and Bill Freehan wasn't ready to give it up yet. So, Humphries got traded again when the 1975 season ended; this time, he went to the Astros. Since the Astros had three dependable catchers (Ed Herrmann, Skip Jutze and occasionally Cliff  Johnson), Humphries was sent down to the minors.

Speaking of age, his birthday was a couple of days ago...so we wish him a belated happy one.
Posted by Chris Stufflestreet at 8:30 AM