Slip Him a "Mickey"

Here's a player who was really popular with fans of the Detroit Tigers: 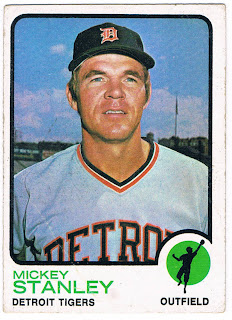 Card #88 -- Mickey Stanley, Detroit Tigers
"Mickey" is a great American name.While it was most associated with a guy who played outfield for the Yankees from 1951-'68, There were others, and Mickey Stanley was another outfielder. A native of Grand Rapids, Michigan, he played in the Motor City for his entire career. However, it was a short-term move to shortstop in 1968 that the Tiger faithful remember best about him.

Originally an outfielder who had been a part-timer since coming up in 1964, Stanley was moved to shortstop late in the 1968 season once the Tigers had already clinched the pennant. He replaced weak-hitting Ray Oyler, whose anemic batting average was considered one of the team's problem areas. Since the outfield was already packed with Al Kaline, Willie Horton and Jim Northrup, manager Mayo Smith hoped that Stanley's speed would make up for his lack of familiarity at the position. The move was considered to be one of the top 10 best coaching decisions of the 20th century, and the Tigers won the World Series against a formidable St. Louis Cardinals team.

Oyler was drafted by the Pilots the next year, but the experiment at short didn't last long into 1969. With his outfield range and ability to get a quick step against balls heading towards the gaps, Stanley returned to his original position and stayed out there for the remainder of his career. When the designated hitter position opened up, Kaline's assumption of that role allowed Stanley to play the most games of his career in 1973. He remained a full-timer until Ron LeFlore arrived in 1975, then returned to a part-time role as a utility player and late-inning defensive replacement. From then until 1978, Stanley took the field where he was needed, at every position except pitcher and catcher.
Posted by Chris Stufflestreet at 8:30 AM