At the beginning of this year's baseball season, this guy took the manager's position of the Boston Red Sox: 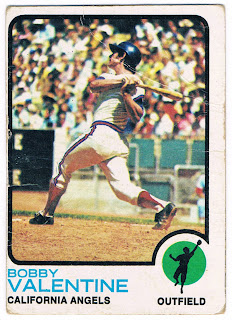 Card #502 -- Bobby Valentine, California Angels
This picture is airbrushed, as Valentine spent his entire career through 1972 with the Los Angeles Dodgers. You can pay an artist to paint red and blue stripes on the uniform and white out the Dodgers' distinctive jersey features, but it was apparently to much to ask somebody to crop out the rest of the Phillies player sitting in the lower right corner.

Starting with California in 1973, Valentine got off to a .302 average, but was injured by the outfield chain-link fence while trying to rob Dick Green of a home run. During the attempt, his spikes were caught and he suffered multiple fractures in his leg. Not only did that injury end his season, it robbed him of his speed, As a result, he never stayed long with his teams as a player. He moved to the Padres in 1975, the Mets in 1977 and the Mariners in '79. He retired that year and moved on to coaching.

In 1985, Valentine was tapped to be the Rangers' manger. A few days before his 35th birthday, he was the youngest non-playing manager in years. He remained with the team through 1992. After a short stint as a manager in Japan, Valentine was named the New York Mets' manager in 1996 and guided them to the 2000 World Series. He was fired by the team after 2002, and he returned to Japan to manage the Chiba Lotte Marines again. He moved to the ESPN broadcast booth in 2009, where he remained until the Red Sox called.

Bobby Valentine is regarded a smart baseball man. Hopefully he's smart enough to keep ESPN executives on his speed dial. Especially if you hear what Red Sox fans have been saying about him.
Posted by Chris Stufflestreet at 8:30 AM