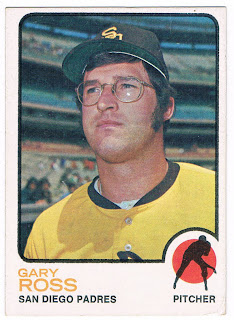 Gary Ross was on the Padres' original squad in 1969, but not its Opening Day roster. He began that season as a member of the Chicago Cubs, the team he debuted with the previous season. A trade during the first month of the season made him part of the expansion team, and he went 3-12 -- losing 11 of those in a row -- as a reliever and spot starter. Ross stayed with the team through 1975, where he occasionally went back to the minors and worked as a starter. Seeing that, the California Angels dealt Bobby Valentine to get him just as the season was about to end.

Through 1977, Ross took a spot in the Angels' rotation. However, his 10-21 record with the team led to his release by midseason, and that was the end of his career. To date, the 11 straight losses he suffered with the Padres in 1969 stands as a club record.
Posted by Chris Stufflestreet at 8:30 AM