This player had played his final major league game by the time this card appeared: 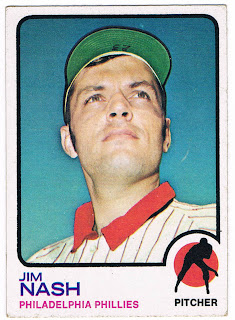 Card #509 -- Jim Nash, Philadelphia Phillies
This card shows some light signs of airbrushing, the result of a midseason trade that sent him to the Phillies. The Phillies released him during the 1973 preseason; he signed with Oakland and spent all of that season in the minors before calling it quits.

After two and a half years with the Braves and a half season in Philadelphia, it was over. As for his nickname? At 6-foot-4 and weighing 240 pounds, there's not a lot of downside to calling him "Jumbo."
Posted by Chris Stufflestreet at 8:30 AM