All three of the guys here are sporting sideburns. It was the 1970s, what else were they going to wear? Once again, not all of these guy were truly "rookies": 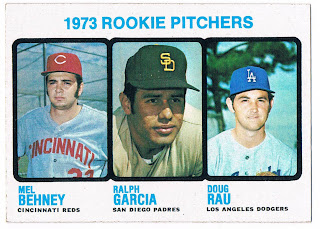 Card #602 -- 1973 Rookie Pitchers
In Mel Behney's case, he had already appeared on a Reds' rookie card in 1972. Those were his only cards, which was interesting because his only major league action came in a two-week trial in 1970. He went 0-2 and never made it back out of the minors. In fact, during Spring Training of 1973, Behney had been traded to the Red Sox and was playing his final season.

Ralph Garcia also didn't make the majors in 1973, reaching the Padres for short stints in 1972 and '74. He stayed in the minors through 1975, and then went to Mexico, where he became a star. This would be his only appearance on a Topps card.

Doug Rau managed to stay around until 1981 and had several more cards in the process. The was a Dodger from 1972-'79, missed all of 1980 due to rotator cuff surgery, and then went to the California Angels in 1981. He was initially a reliever and worked his way into the starting rotation by 1974. He was a capable pitcher, but is perhaps best remembered by a mound conference with Tommy Lasorda during the 1977 World Series that isn't suitable for a family broadcast but lives on thanks to the Internet.
Posted by Chris Stufflestreet at 8:30 AM