Setting Off the Fireworks

Seeing as how today is the Fourth of July, here's a team that provided plenty of fireworks -- both on the field and off -- in 1973: 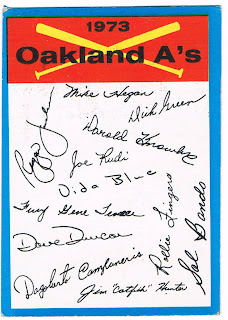 (No Number) -- Oakland A's Team Checklist
The Oakland A's were right in the middle of their three-year run as the best team in baseball. 1973 would see the team win its second of three straight titles, so this checklist is as close as you'll get to a great team at the time.

But is it complete? The infield is solid, with Tenace at first, Green at second, Campaneris at short and Bando at third. A reserve first baseman (Mike Hegan) is present as well. Dave Duncan takes his place behind the plate, but there are only two outfielders here (Reggie and Rudi). Two starters -- Hunter and Blue -- take the mound, with Fingers and Knowles in the bullpen.

They come very close to fielding a "complete" team...but, like the players that made up the roster, they're just a little bit off.
Posted by Chris Stufflestreet at 8:30 AM