Early on in my hobby pursuit, when I was a little less knowledgeable about what was available, I picked up two totally different 1974 Topps cards of this guy: 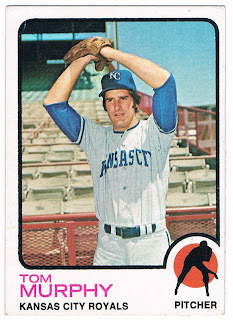 Card #539 -- Tom Murphy, Kansas City Royals
One showed him with the Cardinals, while one explained that he had been traded to the Brewers, and even added a "T" to the card number to update it. I was 11 years old (it was 1984) and was pretty sure I'd picked up something unique out of the same dime box. I was soon introduced to the separate "Traded" series of 1974 as I looked through a book about cards.

That has nothing to do with Tom Murphy, though. From 1968-'79, he appeared with six different clubs, so his appearance on a Traded card really wasn't going to be unique. He came up with the Angels, where he stayed through early in the '72 season. He was then traded to the Royals (as seen above) and then spent 1973 in St. Louis. His trade to Milwaukee after the season led to the card I found. In 1976, he traveled to Boston and then joined the Blue Jays for their inaugural season in 1977. He remained with the Jays until the end of his major league career. While he started with California, Murphy was almost exclusively a reliever on his other stops.

In 1974, he was one of only two American League pitchers to collect a hit (Fergie Jenkins was the other). It was the year after the implementation of the designated hitter, and there was an occasional tweak that placed pitchers in the lineup. That's pretty cool, but when I see him, I immediately think of his place in my own Hobby history.
Posted by Chris Stufflestreet at 8:30 AM