This guy spent parts of eight seasons in the majors, but never spent more than two years with a single team: 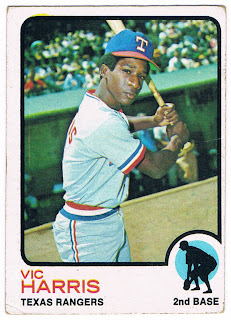 Card #594 -- Vic Harris, Texas Rangers
This card, which shows Vic Harris striking a batting pose taken in front of the dugout (really natural, I might add sarcastically), was the first of his career.

The "journeyman" tag applies to Vic Harris for his position as well as his teams. He played at six different positions during his career. Originally signed by the Oakland A's, he had already been traded to Texas before he came up to the league in 1972. He was largely a second baseman that year, taking the place of Lenny Randle. In 1973, however, he took the outfield more often. In all, he appeared in all three outfield positions as well as second, third and shortstop.

After playing for two season with the Rangers, Harris moved to the Cubs for two seasons, spent 1976 in St. Louis and then went to the Giants for two more years. He spent all of 1979 in the minors, but made it onto the Brewers' roster in 1980. After being released for his weak hitting, Harris moved on to Japan. He spent three years there with the Kinetsu Buffaloes, starting off strongly but fading in his final two seasons. In 1984, he attempted a comeback but was unable to get out of the Cardinal's farm system and called it a career.
Posted by Chris Stufflestreet at 8:30 AM