The title of this post has almost nothing to do with this player. It's actually a mention that this blog is now at the halfway point. It's hard to belive that, as I feel like I have yet to scratch the surface on this set. From here it's all downhill (or so they say), but hopefully it doesn't seem like I'm coasting. And now to the regularly scheduled entry...fittingly, a man who often came to the mound in the middle of a game: 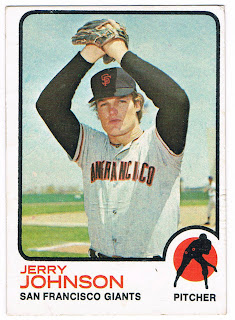 Card #248 -- Jerry Johnson, San Francisco Giants
Jerry Johnson wasn't in a Giants uniform when the 1973 season began. After three years as a relief specialist and a big help in getting the team to the 1971 postseason, he was considered expendable and placed on waivers during Spring Training. The Indians picked him up. And so, the revolving door of teams continued for Johnson, who managed to play on seven different teams in his ten major league seasons.

Johnson was signed by the Mets is 1963 as a third baseman. However, he struggled with his defense and became a pitcher in order to stay in the game. When he finally came up to the majors in 1968, it was as a Phillie. After being involved in the Curt Flood trade, he split 1970 between the Cardinals and San Francisco. After the one season in Cleveland, he stopped in Houston and spent two years with the Padres before joining the Blue Jays in their inaugural season.

In fact, Jerry Johnson earned the win the first time the Toronto Blue Jays ever took the field, coming in during the fifth inning to preserve the victory. He retired after that season with a career 48-51 mark and a 4.31 ERA.
Posted by Chris Stufflestreet at 8:30 AM