This player lost his spot on the Miracle Mets team due to a clash with Gil Hodges. Instead, he went to a new team and became a part of a different winner: 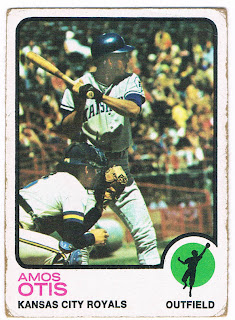 Card #510 -- Amos Otis, Kansas City Royals
Shown here taking his turn at the plate against the Brewers, Amos Otis was given short looks with the Mets in 1967 and '69. However, Hodges was set on moving him to third base and Otis disagreed. That got him sent back to the minors, and after the 1969 season, he was traded to the Royals for Joe Foy. That trade worked in Kansas City's favor; Foy was out of baseball by 1971 and Otis was a fixture in the Royal outfield for over a decade.

He took part on a team that won three straight division titles from 1976-'78, but ended up losing the ALCS each year to the Yankees in hard-fought contests. A five-time All-Star and three-time Gold Glove winner, Otis also led the league in steals for 1971. By 1980, though, his skills diminished and Willie Wilson took over centerfield. That didn't stop Otis from crushing three homers in that year's World Series against the Phillies. He remained in Kansas City until 1983, then finished his career in Pittsburgh in '84.

After retiring, Otis was a coach. He worked with the San Diego Padres in 1988-'89 and for the Rockies during their inaugural season in 1993. He also admitted in the early 1990s that he used a corked bat for part of his big league career.
Posted by Chris Stufflestreet at 8:30 AM