Underrated at Third Base?

In 1973, this guy was returning to the Dodgers after nine years away: 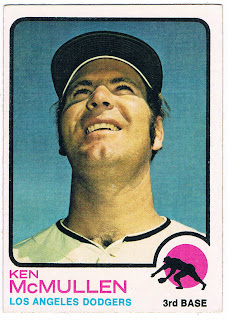 Card #196 -- Ken McMullen, Los Angeles Dodgers
That's why this picture was chosen for the card. Though Topps could have used a photo of him as a fresh-faced rookie in the correct uniform (and they've been known to recycle photos from several years in the past), they went with an old Angels picture that required minimal airbrushing. In fact, it looks like this picture was likely taken at the same session as the photo on his 1972 Topps card.

Signed out of high school, the Oxnard, California native first appeared as a Dodger in 1962 and was part of the team's World Series-winning team the next year. He was dealt to the Senators after the 1964 season. Taking over the "hot corner," he remained as the regular there through 1970. While overshadowed by Brooks Robinson, he was a very good defensive threat that Mickey Mantle called "underrated" at the position.

Early in the 1970 season, he was dealt to the Angels and contributed at third there as well. However, when he was traded back to Los Angeles, he was limited to pinch hitting and late-inning replacement. He spent three years with the Dodgers -- batting during the 1974 NLCS -- before moving on to Oakland in 1976 and the Brewers in '77.

Today, McMullen serves as a representative of the Dodgers' Legends Bureau.
Posted by Chris Stufflestreet at 8:30 AM