Though his skills really didn't translate to an everyday position, this guy still played for 13 years in the majors, and all of them with the same team: 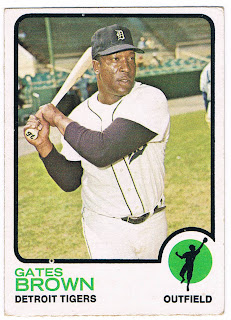 Card #508 -- Gates Brown, Detroit Tigers
A member of the Tigers since 1963, Gates Brown had largely been called upon as a bench player but was only a regular in 1964. Since the Tigers also had Al Kaline, Mickey Stanley, Jim Northrup and Willie Horton, his outfield time was limited and he helped whenever he was called. In 1968, he had one of the all-time finest years of a pinch hitter, hitting .462 over the season in that capacity. In 1973, Brown was available to fill the new DH position and appeared in the most games (125) in any season of his career, but reverted to a pinch hitter for the final two years of his career.

Before becoming a major leaguer, however, Brown had some off-field issues that landed him in an Ohio reformatory as a teenager. His baseball skills helped to set his life straight, and he never regretted getting a second chance. In fact, as his playing days wound down, he served as a mentor for Ron LeFlore, who had a similar early-life hard-luck story.

After his retirement, Brown served as a hitting coach for the Tigers from 1978 through 1984. He still instructs at a Tiger fantasy camp in Florida and has long been a fan favorite.
Posted by Chris Stufflestreet at 8:30 AM