Keeping Up With the Joneses

This player is probably best known for being a hero in the 1969 World Series: 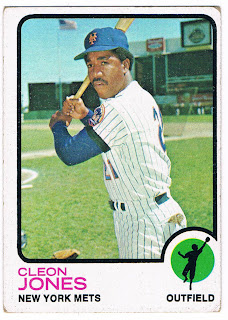 Card #540 -- Cleon Jones, New York Mets
Although Cleon Jones caught the final out of the Series, it was an incident earlier in that game that helped spark the rally he is remembered for. A pitch that seemed to hit Jones in the shoe went unnoticed until manager Gil Hodges showed the umpire that the ball had shoe polish on it. The next batter was Donn Clendenon, who slammed a home run to get the Mets within one run of Baltimore. On his next trip to the plate, Jones doubled in what proved to be the winning run.

Jones came up to the Mets for short stints in 1963 and '65, and became a regular in the Shea Stadium outfield in 1966. He was basically a fixture there through 1974 and possessed what was considered one of the game's best arms. He showed that strength in September '73 against the Pirates, connecting with Wayne Garrett to cut down Richie Zisk at the plate. At a time when the Mets were fighting for the division title, Jones showed he was still valuable to the team.

Unfortunately, Jones was released after an altercation with Yogi Berra in 1975. The next year, he was with the Chicago White Sox but was released after thirteen games and retired. He remains as a beloved figure to Mets fans for his place on the 1969 "Miracle" team and is a member of the team's Hall of Fame.
Posted by Chris Stufflestreet at 8:30 AM