This player wore a black armband for the rest of the 1972 baseball season to remember the slain athletes from that year's Olympics: 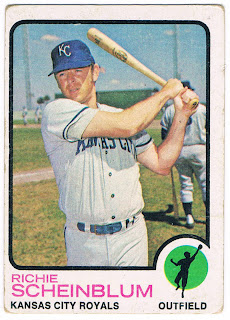 Card #78 -- Richie Scheinblum, Kansas City Royals
He's not wearing it here, but this appears to be a Spring Training photo. The athletes were members of the Israeli team and Richie Scheinblum (who was Jewish) claimed he wore the band not due to their shared religion, but due to the fact that they were fellow humans.

Scheinblum was a native of New York and grew up in New Jersey. While growing up, he taught himself to hit from both sides of the plate. During his college career at C.W. Post, he excelled in a number of sports, earning 10 letters. He decided to stay with baseball, signing with the Indians. He had short stints with them in 1965, 1967 and 1968 but never managed to stick with them. A similar experience with the Senators in 1971 led to him being once again sent down to the minors.

That 1971 season was one to remember. Scheinblum played for the American Association's Denver Bears that year and batted .388. It was the highest in the league in 20 years, and would never be equaled during the 26 years before the league folded.  That season allowed him to be a regular in 1972, when the Royals purchased his contract. He made the most of that season, earning a spot on the All-Star team. However, his lack of power and poor fielding worked against him and he was traded to the Reds in the off-season.

After that, Sheinblum bumped around for two seasons, from the Reds to the Angels to the Cardinals,and back to the Royals. He played in Japan the next two seasons until suffering a torn Achilles tendon during a pick-up basketball game in 1976. That injury ended his career.

After retiring, Scheinblum ran a jewelry store in California before eventually moving to Florida and working for a company that specializes in embroidery.
Posted by Chris Stufflestreet at 8:30 AM