As the 1973 season got underway, this guy was beginning with a new team: 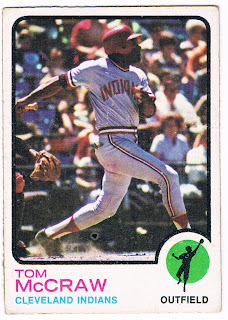 Card #86 -- Tom McCraw, Cleveland Indians
Tommy McCraw was traded to the California Angels on April 2, just before the season opener but after Topps issued the card you see above. Which is too bad...an airbrush artist really could have gotten the "correction" made pretty quickly on the action shot.

McCraw had been a fixture in the White Sox' outfield from 1963 through '70. After that, he moved around, from the Senators in '71, the Indians in 1972, the Angels in '73 and back to the Tribe in a 1974 trade. He finished his big league career in Cleveland in 1975. During his year in Washington, McCraw recorded the team's last out before they moved to Texas when he was caught trying to steal second in the 8th inning. He would also be the Angels' first-ever designated hitter in 1973.

When he retired, McCraw was a teammate of player/manager Frank Robinson; he went on to serve as a batting coach for 23 seasons, and four teams he coached were managed by Robinson.
Posted by Chris Stufflestreet at 8:30 AM