To fill out this team picture, it looks like several players brought along neighbors and relatives. Maybe this was taken during a team cookout: 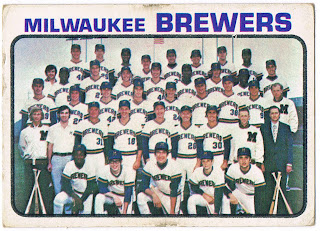 Card #127 -- Milwaukee Brewers Team Card
It had only been a few seasons since this club had entered the league as the expansion Seattle Pilots and then moved to Milwaukee just six days before the 1970 season. Though the Braves had already been there from 1953-'65, there was another Milwaukee Brewers in the American League's inaugural season..the moved to St. Louis in 1902 and became the Browns. The name Brewers would also be used for the city's minor league franchise from 1902-'52, and was used as far back as 1884.

In 1972, the team moved to the A.L. East when the Senators went to Texas and took their place in the A.L. West they brought from Seattle. They also brought in a former Brave (Del Crandall) to manage the club. The moves made little difference, as the team finished in the same place -- last -- as they did in 1971. They would improve to fifth in 1973. The highlight of the Brewers' '73 season occurred off the field, when they drafted a young shortstop named Robin Yount.

The team would make gradual improvement from year to year, but never posted a winning season until 1978. Few of the players shown here would be around to see that, however. But the Brewers were a strong  team for several years in the decade after that. Today, however, they aren't even in the same league (moving to the National League in 1998).
Posted by Chris Stufflestreet at 8:30 AM