A Man Called "The Blade"

At 6 feet tall but only 150 pounds, this pitcher was nicknamed "The Blade" due to his physique: 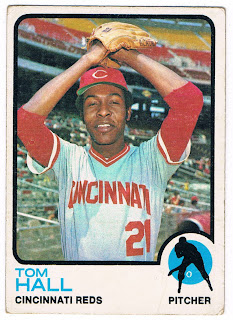 Card #8 -- Tom Hall, Cincinnati Reds
An occasional starter but mainly a setup reliever, Tom Hall pitched with four clubs in his major league career. Coming up with the Twins in 1968, he was traded to the Reds after the 1971 season. After two division titles and one pennant, he was traded to the Mets in 1975 and then the Royals in 1976. When he was released halfway through the '77 season, he signed with the Twins again but never made it back to the club.

Though he notched a respectable 52-33 lifetime record and a 3.27 ERA, Hall was noted during his career for his control. He tossed a two-hitter against the Angels in 1968 and twice notched 12 strikeouts in a game. However, injuries limited his effectiveness late in his career.
Posted by Chris Stufflestreet at 8:30 AM