Research for this player kept bringing up information about another, more modern player with the same name: 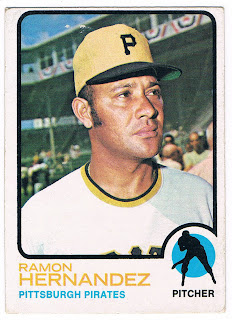 Ramon Hernandez spent nine major league seasons with four different teams, but the vast majority were with the Pittsburgh Pirates. He came up with the Braves in 1967 and then the Cubs the next year. He spent 1971-'76 with the Pirates, returned to the Cubs and then finished with the Red Sox in 1977.

Hernandez pitched 337 games, all of them as a reliever. He was noted for his sidearm delivery, with a twist that made it hard for opponents to see what type of pitch he would be throwing. It was similar to the motion his teammate Kent Tekulve used, except that Hernandez was left-handed and Tekulve threw much harder.

Ramon Hernandez passed away in his native Puerto Rico in 2009.
Posted by Chris Stufflestreet at 8:30 AM