It's hard to believe that 164 homers would be the all-time Chicago White Sox record until 1987, but it was, and this player held it: 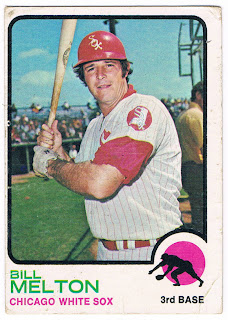 Card #455 -- Bill Melton, Chicago White Sox
It looks like Bill Melton was asked really quickly for a pose when this picture was taken. He came up to the White Sox in 1968 and was a regular at third through 1975. Not particularly noted for his glove prowess (in fact, Harry Carey would often criticize him on the air for his miscues), his home run production made up for the hope that no liners were hit near the "Hot Corner."

In 1969 and '70, he led the team in home runs, and in '71, he led the entire league in the statistic. It was the first time a White Sox player had ever lead the American League in homers...but when you think of it, the White Sox really weren't known for the ability to hit for the fences at that point. Before 1968, they were chiefly remembered for being dominant as a team during the Dead Ball era, and also for throwing the 1919 World Series. Melton was rewarded for his season by being named to the 1971 A.L. All-Star team.

However, it was downhill from there. A freak injury at his home (he herniated a disc in his back while breaking his son's fall from the garage roof) shortened his season in 1972. Unfortunately. he was never the same. Though still able to produce double digit home run totals from 1973-'75, Melton was clearly on the way out. He was traded to the Angels after the '75 season. He played there for a year, and finished in 1977 with the Indians.

After his career, Melton was a real estate agent before getting a job in the White Sox' marketing department. Today, he's a broadcaster for the team. His all-time homer record is long gone (just like Comiskey Park). Harold Baines topped it in '87, then Carlton Fisk beat that a few years later. Then, Frank Thomas rewrote the club's record book.
Posted by Chris Stufflestreet at 8:30 AM