The player on this high-numbered card was no longer on the team when the card showed up in packs: 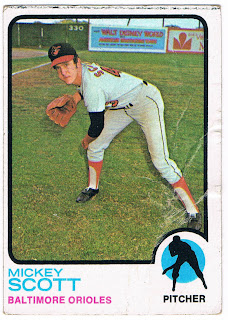 Card #553 -- Mickey Scott, Baltimore Orioles
This was the second straight year that Mickey Scott shows up in the final series of a Topps set; in 1972, he would share space with two of his fellow Baltimore teammates. Here, he's making a pitch fairly far from the mound in a picture that's obviously from Florida...check out the Disney Word sign in the background. Walt Disney World, by the way, opened in 1972, the same year this shot was taken.

Born in Germany but raised in Newburgh, New York, Scott was signed by the Yankees in 1967 but didn't come up to the majors until 1972. By then, he was with Baltimore. However, the Montreal Expos bought his contract in May of '73 and he pitched with them the rest of the year. He spent '74 in the minors but came back in 1975-'77 with the California Angels. He retired after spending all of 1978 in the minors.

Scott was a starting pitcher during his early days in the minors but converted to a relief specialist by the time he made the majors. Though he was limited in his appearnces while in the majors, he was very effective during his minor league career. After his playing days, he owned a bar in Binghamton, New York and worked in various capacities for the New York Yankees. Sadly, Mickey Scott died in 2011 at the age of 64.
Posted by Chris Stufflestreet at 8:30 AM