When I decided to start writing this blog three times a week, I made an executive decision that may have been a little gutsy: I decided to go through with it despite missing some cards. That's not exactly true; I completed the base 1973 Topps set at the Chicago National in 2005 (Johnny Callison was the final card), but there were a handful of team checklist cards I still needed. I assumed I had time on my side, since three cards a week meant the blog would run for more than four years before I'd be finished.

A couple of weeks ago, this card arrived in the mail: 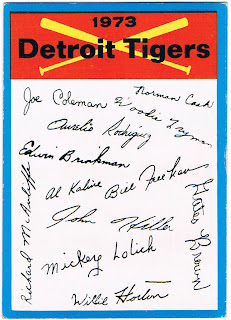 (No Number) -- Detroit Tigers Checklist Card
The fact that this card was still needed for my collection shouldn't surprise anybody. I find that when it comes to 1970s cards, the last several cards on my wantlist are invariably of players from the Tigers and Reds. And Dwight Evans.

This card doesn't yet finish the set for me...I still need one more (the Milwaukee Brewers checklist card). Again, I have time on my side.

So far, none of the blue-bordered checklist cards featured in this blog have included a complete team lineup, so lets see what the Tigers have among their dozen players:

Norm Cash at first, Dick McAuliffe at second, Ed Brinkman at short and Aurelio Rodriguez at third. Bill Freehan is catching...and Al Kaline, Willie Horton and Ike Brown are in the outfield. After them, there's a rotation of Lolich, Fryman and Coleman, with John Hiller in a relief role.

That's about the most balance you can get out of a dozen players. And I'm still impressed how much better the penmanship generally was among the players then. Every name on the card is legible.
Posted by Chris Stufflestreet at 8:30 AM