Airbrushed or not? I think it's real, but the cap looks really nice either way: 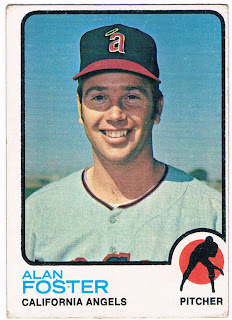 Card #543 -- Alan Foster, California Angels
Foster appears to be wearing an Angels jersey -- you can see the top of the "G" on his jersey --so it's definitely not an old picture from his time with the Tribe in '71 or his '67-'70 stint in Dodger blue. The stats on the back do mention that he spent most of '72 at Salt Lake City, so this photo likely came from Spring Training as there's little chance Topps got his picture during the time he pitched his eight games in relief for the team in 1972.

As it turned out, 1972 would be Alan Foster's only year with the Halos. He was sold to the Cardinals just as the season was getting ready to begin. So despite being part of the final series that year, Topps didn't seem to be worried about getting an airbrush artist busy getting Foster into a St. Louis uniform. 1973 was his best year in the majors, seeing Foster moving to the starting rotation and getting his first winning record. He pitched for two years with them and finished up with the Padres between 1975-'76.
Posted by Chris Stufflestreet at 8:30 AM