A "Hand" to Count On

This photo is interesting if only because of what you don't see: 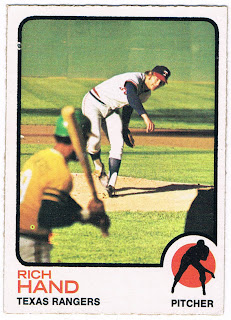 Card #398, Rich Hand, Texas Rangers
There's Rich Hand on the mound, Bert Campaneris at the plate...but the ball isn't in the picture. Either it's taken a wide arc or Campaneris simply didn't swing at it. While a shadow is seen that is likely the umpire, this is another picture that shows no other player on the field. I've mentioned before that I like that, since this moment is between the pitcher and batter. The photo would be better with a visible baseball in it, though.

Rich Hand was coming off his finest season in 1972. It was the only year he would see double-digit win totals and was the top ace of the staff. However, his 10 wins were matched with 14 losses. He had the second-highest strikeout total of the '72 Rangers with 108...but walked almost as many (103) as he whiffed. 1973 would be Hand's last in the majors. He was traded to the Angels that May (and appeared on a 1974 Topps card with them), but spent all of '74 in the minors before calling it a career.
Posted by Chris Stufflestreet at 8:30 AM