Like Mickey Rivers last week, I remember this guy more for his role with the Yankees in the late 1970s: 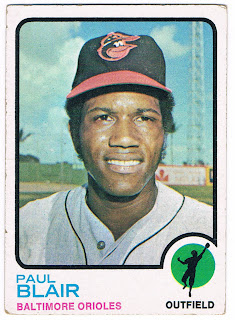 Card #528 -- Paul Blair, Baltimore Orioles
Of course, Paul Blair was a platoon player and late-innings replacement by that time, but his value to the Yankees at the time was larger than what his numbers may have shown. His nickname "Motormouth" came from his talkative nature, but when he was at his peak, his glove could do quite a bit of talking all by itself.

However, before helping the Yankees in their mini-dynasty years, he was a regular on a very good Orioles team that was in the postseason six times between 1966 and 1974. He possessed great speed, which allowed him to play shallow in the outfield and still get to balls that were hit deep. That skill earned him eight Gold Glove awards, including consecutive awards from 1969 and '75. During the 1973 season, he was elected to his second and last All-Star game.

Despite being an integral part of those powerhouse teams, Blair seemed to be footnotes in several great moments that involved others. In 1969, he would be the first batter to face Nolan Ryan in what turned out to be the only World Series game in his career...and hit a ball that was memorably caught by Tommie Agee. During his Yankee days, he was sent into the outfield during a game against the Red Sox in 1977 by Billy Martin, which then led to a televised confrontation in the dugout between Martin and the guy Blair replaced, Reggie Jackson.
Posted by Chris Stufflestreet at 8:30 AM