This player won the Rookie of the Year award for the National League in 1969: 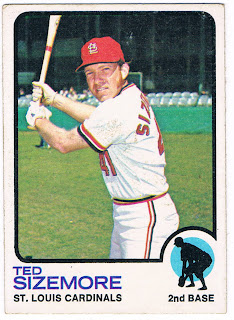 Card #128 -- Ted Sizemore, St. Louis Cardinals
However, Ted Sizemore's 1970 contest wasn't as exciting, so the Dodgers traded him to St.Louis to get Dick Allen. To their credit, the Dodgers had plenty of talent at second base coming up in their organization and really needed a slugger, so Sizemore was considered expendable since is position was so deep. Despite a good batting eye and sure glove, his speed and base-stealing prowess weren't what Davey Lopes eventually provided at the position. In that sense, the team likely did a favor by letting Sizemore go, as he spent the next five years as the Cardinal's regular second baseman.

He batted behind Lou Brock in St. Louis, and Brock gave some of the credit to Sizemore for his base-stealing prowess because Sizemore's at-bats kept opponents busy enough to provide chances to run. Sizemore was traded back to Los Angeles in 1976 after Lopes fell into a slump, and the went to the Phillies for two more years, appearing in the NLCS in both 1977 and '78. Unfortunately, his team lost in both seasons to the Dodgers. He spilt 1979 between the Cubs and the Red Sox, and called it quits after spending 1980 in Boston.

After retiring, Sizemore took a job with the Rawlings sporting goods company as a major league player liaison and rose to an executive position. Today, he's the CEO of the Baseball Assistance Team, an organization that helps out former players in times of need.
Posted by Chris Stufflestreet at 8:30 AM