This guy taking a practice swing with an Adirondack bat was a member of the 1969 World Champions: 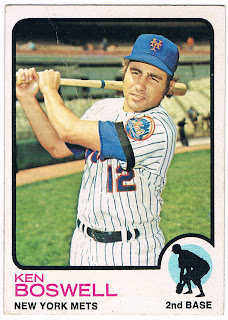 Card #87 -- Ken Boswell, New York Mets
Ken Boswell was a sure-handed second baseman but possessed a limited range. As a result, the Mets platooned him as a starter with Wayne Garrett, sending him up when a right-hander was scheduled to take the mound against them. While the platoon allowed him to play the bulk of the Mets' games in 1969, the Orioles only started one right-hander (Jim Palmer) in the five-game series and Garrett is thought of more as a member of the championship club.

Boswell  started more than 100 games each year from 1969 through '72, before the Mets acquired Felix Millan as an everyday second baseman. Boswell  then became a pinch-hitting specialist and filled in where he was needed. He tied a record by stroking three pinch hits in the 1973 Series. After 1974, the Mets traded Boswell to the Astros, where he continued to serve in that capacity for another three seasons.

A career .248 hitter, Boswell turned the level up in the postseason, with a .421 clip across two NLCS and two World Series.
Posted by Chris Stufflestreet at 8:30 AM