Sliding at home and scoring is a man who celebrates his 63rd birthday today: 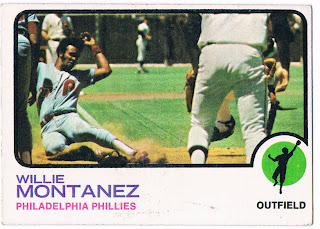 Card #97 -- Willie Montanez, Philadelphia Phillies
It's pretty obvious he's playing at Candlestick Park, considering the number of Giants players shown in the photo. There's a catcher waiting for the throw and a pitcher backing him up, while a third baseman and left fielder are visible as well. Meanwhile, the next batter waits his turn. With that many players showing (even without uniform numbers), perhaps the game can be pinpointed.

Montanez scored in three games at Candlestick during '72. In the first one, he scored on a home run. In the second, he was the first of two who scored on a triple. That doesn't match with the action. That leaves the third game on July 16, when he ran from second on a Don Money single in the 4th inning.

Willie Montanez had a long career. He first came up in 1966 with the Angels but wasn't a full-time major leaguer until 1970. He was with the Phillies until '75 and bounced around with seven other teams between then and 1982, when he finished his career back in Philadelphia.

He was known as "Hot Dog" due to the way he played. At first base, he would often do a move after catching a fly ball that looked like he was putting a gun into its holster. During a pickoff attempt, he sometimes tagged the runner repeatedly even if he was safe. If he hit a home run, he sometimes ran around the bases slowly. These antics often irritated teammates, opponents and fans alike. It definitely rubbed raw nerves on his managers.
Posted by Chris Stufflestreet at 8:30 AM