A Man of Many Positions

The cap is obviously airbrushed, as he had played his entire career in Minnesota through 1972: 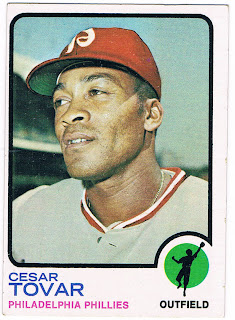 Card #405 -- Cesar Tovar, Philadelphia Phillies
On September 22, 1968, Cesar Tovar became the second person in major league history to play all nine defensive positions in a single game. Interestingly, when he took the mound to pitch, the first batter he faced was Bert Campaneris, the only other player who had achieved the distinction. He was a better hitter than most people remember; though he normally hit in the .280 range, he managed to get 195 hits in '70 and 204 in '71. He also broke up five no-hit bids between 1967 and '75.

1973 was the only year Tovar played in Philadelphia, since his regular centerfield slot was being shared with both Del Unser and Mike Anderson. Between 1974-'76 he played with Texas, Oakland and the Yankees. While in the American League, he sometimes hit at DH, which made him the second person (again, after Campaneris) to play at all 10 positions on the field.

Cesar Tovar returned to his native Venezuela after retiring, and died there of pancreatic cancer in 1994.
Posted by Chris Stufflestreet at 8:30 AM