Eddie Fisher had been appearing on Topps cards since 1960, and this one would be his final one: 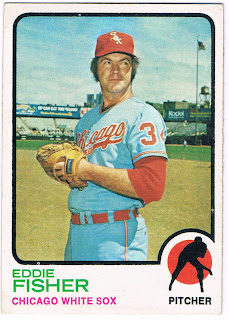 Card #439 -- Eddie Fisher, Chicago White Sox
It's interesting that Fisher is shown in his White Sox uniform, as he spent most of '72 on the Angels. It was his second stint with the ChiSox, after playing with them from 1962-'66. They used a different uniform then, so there wasn't the option of just digging into the Topps archives for an old photo.

Notice how the uniform number appears on Fisher's sleeve. The Chicago White Sox liked to put them in different places. While it's easy to blame owner Bill Veeck for that, they continued the practice after he sold the team (and after he passed away), eventually placing the number near the crotch by the late 1980s.

During Fisher's first stint with the Sox, he was traded to the Orioles and helped the team in its run for the pennant. He missed out on getting into that year's World Series, however, as three of the four games were complete-game wins for the O's.

Shortly after this card showed up in wax packs, Fisher was playing for the Cardinals, who released him after the season was over. His major league career was over.
Posted by Chris Stufflestreet at 8:30 AM