This guy looks like he's warning the photographer about what will happen if takes one more step. 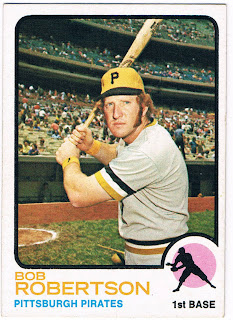 Card #422, Bob Robertson, Pittsburgh Pirates
According to the statistics on the back of the card, Bob Robertson only hit .193 in '72, so the cameraman may not have felt any pressure, despite the piercing eyes and flared nostrils. Not only that, but with fans coming in to take their seats, there would be plenty of witnesses in case of an assault.

That said, Robertson was known for crushing the ball. He led three minor leagues in home runs on his way up to the Pirates, was the first player to put a ball into the upper deck at Three Rivers Stadium and hit three home runs in a single playoff game in 1971. In fact, Pirate announcer Bob Prince famously said of him, "He could hit a ball out of any park...including Yellowstone."

Unfortunately, Robertson had some health issues that complicated things for him. A kidney obstruction took him out for the entire 1968 season. Surgery on both knees limited him to part-time status after '74. When the Pirates released him in March '77, he sat out the entire season before coming back to play with both expansion franchises. He played for the Mariners in 1978 and the Blue Jays in '79.
Posted by Chris Stufflestreet at 8:30 AM