Quick...who earned the win in the first night game in World Series history? The answer: 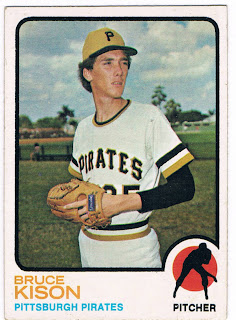 Card #141 -- Bruce Kison, Pittsburgh Pirates
This picture shows how lanky Bruce Kison was. However, his body size allowed him to use his log arms to give a sidearm delivery that kept batters on their toes. He was also known for being wild, hitting several opponents. Later, he admitted that blisters caused much of that, but it didn't make him popular during his playing days.

On October 13, 1971, Bruce Kison took the mound against the Orioles. While taking until 1971 to get a night game might be surprising since all Series games are played at night now, it is more surprising how quickly the Series day games disappeared after that. A couple of other significant things happened in that Series: Kison tied a record by hitting three opposing batters in that night game, and got married the same day his team won the championship.

Kison stayed with the Pirates through 1979, which gave him a second Series ring. He was a key member of the rotation despite never getting more than 14 wins in any season. In 1980, he went to the Angels and helped them get to the postseason in 1982. He finished his major league career in Boston in '85. He went on to play in the Senior League in 1989 and coached for several teams before becoming a scout. He's still doing that today, for the Baltimore Orioles (the same team he beat in two World Series).
Posted by Chris Stufflestreet at 8:30 AM