A Small Cloud of Dust

While the cloud of dust at his feet looks a little neat, it could indicate he has just thrown his pitch into the dirt: 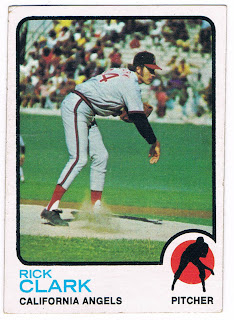 Card #636 -- Rick Clark, California Angels
For Rick Clark, it was a metaphor for his major league baseball career. Though this card appeared in Topps' final series in 1973, he was done with the big leagues and never played at all that year. He was purchased by the Phillies before Spring Training began and spent the entire season at the AAA level.

Clark's Wikipedia entry is exactly one sentence long. The back of this card features more information about his career than that. Although he won 12 games as a rookie in 1967, his record after five partial seasons was 19-32. That may have marginalized him a bit.
Posted by Chris Stufflestreet at 8:30 AM