This photo definitely wasn't taken at Jarry Parc (or, in its French pronunciation, Parc Jarry), the original home of the Montreal Expos: 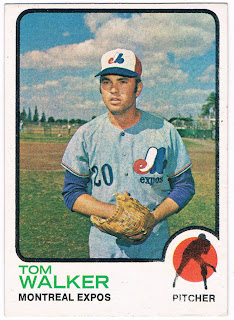 Card #41 -- Tom Walker, Montreal Expos
Of course, he's in his road grays, which means he wouldn't have been there anyway. It's pretty certain he's not standing in a major league stadium, however. The Expos trained at West Palm Beach through 1972, but this photo could have been taken anywhere in Florida. Since he was born and raised in Tampa and played his first two minor league seasons in Miami, Walker likely feels right at home.

It appears Walker is standing in the same field as Ron Hunt did when he posed for his photo. The pictures were likely taken on the same day.

1972 was Tom Walker's first year in the majors. He was a relief specialist -- what is called a "setup man" today -- and posted a 2-2 record over 45 games and 75 innings. He was a starter for at least part of his time in the minors, as the back of this card mentions a 15-inning no-hitter for Dallas/Ft. Worth in 1971. He did start a few games for Montreal in 1974, before they gave up on him and traded him to Detroit. After a season with the Tigers and another with the Cardinals, he was back in Montreal to start the 1977 season. However, he was waived mid-season and claimed by the Angels. He only made it to the mound for California once: for two innings in relief during a disastrous 10-4 drubbing at the hands of the Twins (and his former skipper Gene Mauch). He went back to the minors and finished his career there.


His son is Neil Walker, the current second baseman for the Pittsburgh Pirates.
Posted by Chris Stufflestreet at 8:30 AM