No Need to Make Fun of This Cleveland

Spring training photos are often neat because of the way they feature palm trees or appear to be taken inside a municipal park. I can't get over the way it seems like this guy's pitching in front of a hospital: 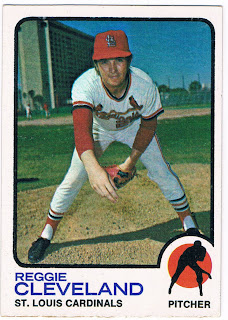 Card #104 -- Reggie Cleveland, St. Louis Cardinals
Reggie Cleveland has a name that should have seen him spend at least some time in a Tribe uniform, he never had to bother calling Municipal Stadium home. Seeing as how the Indians were a laughingstock at the time, that may have been a good thing for his career. He managed to pitch against the Indians after 1973, after he was traded to the Red Sox. That trade resulted in this "headline" on the back of his '74 Traded card: Cleveland Travels to Boston.

He spent the rest of his carrer pitching in the American League. He was part of Boston's 1975 pennant-winning team but missed their meltdown in '78 after Texas bought him early in the season. He was then traded to Milwaukee after that season and pitched for three years with the Brewers. He was done when he was released before Spring Training in 1982.

Cleveland was born in Saskatchewan, Canada. His son Jonathan was a member of the Canadian Olympic swim team in 1988.
Posted by Chris Stufflestreet at 8:30 AM