According to the legend, Jimmy Wynn was called "Toy Cannon" because he was small (5' 8") but made a big "pop" with his bat. Here he is swinging his bat in the on-deck circle of another team's field: 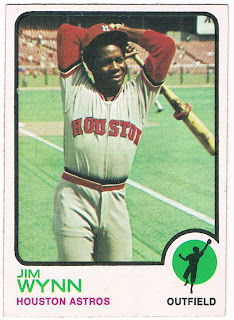 Card #185 -- Jim Wynn, Houston Astros
Those Astros road grays really stood out because of the contrast those orange sleeves gave them. No wonder they went on to the multi-colored unis a few years later.

This may be one of the first cards to show a batting donut, invented by former Yankee Eltson Howard about a decade before that. Since most photos used on cards before 1973 were posed shots, there wasn't a lot of images of batters actually standing in the on-deck circle. However, note that I used the word "maybe" because I'm not in a place where I can pull out my cards to verify that. If there is an earlier card with one, let me know in the comments section.

In 1973, Jimmy Wynn had spent his entire major league career in Houston, dating back to 1963 when the team was still known as the Colt .45s. Starting at shortstop (probably also due to his smaller stature), he moved to center by the end of his rookie year and became a fixture at that position for over a decade. He was a power hitter, but playing home games in the Astrodome -- which had longer fences -- may have masked his career numbers. He was also known for having a sharp eye and walked often.

1973 would be Wynn's last season with the Astros. Traded to Los Angeles, he helped them win a pennant and earned Comeback Player of the Year honors. However, a shoulder injury in 1975 limited his effectiveness and he was moved to left. In 1976, he played in Atlanta and split '77 as a DH between New York and Milwaukee.

Because he played in a era known for low offense and played for so long in a low run-scoring park, Wynn is sometimes pointed out by "numbers" guys as a player who may have had a legitimate shot to become a Hall of Famer had he played somewhere else.
Posted by Chris Stufflestreet at 8:30 AM