In 1969, the entire Chicago Cubs infield was named to the National League All-Star team. Two were slated to be starters...third baseman Ron Santo and this shortstop: 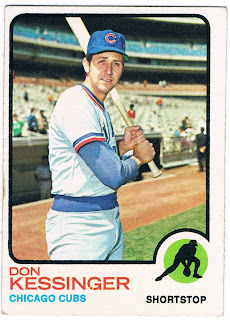 Card #285 -- Don Kessinger, Chicago Cubs
Don Kessinger spent 11 seasons in Wrigley Field, including the magical but ultimately frustrating 1969. He was the archetypal "good field, no hit" infielder that seemed to be so prevalent during that era. His hitting prowess was so weak, when Leo Durocher took over the Cubs in 1966 he suggester Kessinger try becoming a switch-hitter to improve his chances. He responded with a .274 season and became the team's leadoff hitter for several years.

The back of this card mentions Kessinger reaching two milestones during 1972. He played in his 1,000th game and knocked out his 1,000th hit during the season. That would be about the halfway point for both marks, as he ended up with just over 2,000 games and just under 2,000 hits. However, those final years weren't spent in Wrigley Field. As the Cubs began shedding the remnants of their 1969 squad, Kessinger was traded to the Cardinals after the 1975 season.

He would return to the Windy City in 1977. This time, however, he was sent to the team that played in Comiskey Park. In 1979, he was briefly the White Sox' player/manager. During his tenure, the White Sox had to forfeit the second game of a doubleheader on July 12 because the fans rioted during a "Disco Demolition Night" promotion hosted by area DJ Steve Dahl. The events weren't his fault, but he is still the last manager of an American League team to forfiet a game.
Posted by Chris Stufflestreet at 8:30 AM